Postgraduate Director of UIN Antasari, Prof. Dr. H. Saifuddin Sabda, said that the seminar was carried out as a form of embodiment of the new UIN Antasari slogan, which is based on local and global insight. “We hope that by holding this seminar, we can show the role and position of Malay countries in the social, political and educational fields of the world,” he said.

As the keynote speaker, the Chancellor of UIN Antasari Banjarmasin, Prof. Dr. H. Mujiburrahman, M.A., also said that UIN Antasari was connected with the theme at the seminar because of the slogan. Furthermore, he also showed how Islamic studies and study of community groups are sometimes difficult to distinguish such as Islamic norms and Islamic history which are also difficult to separate. “This seminar will give an insight on how Muslims practice Islamic teachings in society because Islam basically influences society as it shows its influence on the language in the Malay state or changes the identity of Malay people through the spread of Islam. Speaking of religion, there are 3 things that we can draw, the first is religious study for the provision of life, the second is learning about religion means that we can learn from several religions and compare them.  The last is about learning from religion which is the source of the norm, can even be done by people who do not believe in religion,” he concluded. 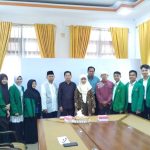 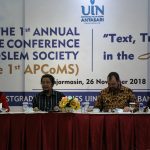