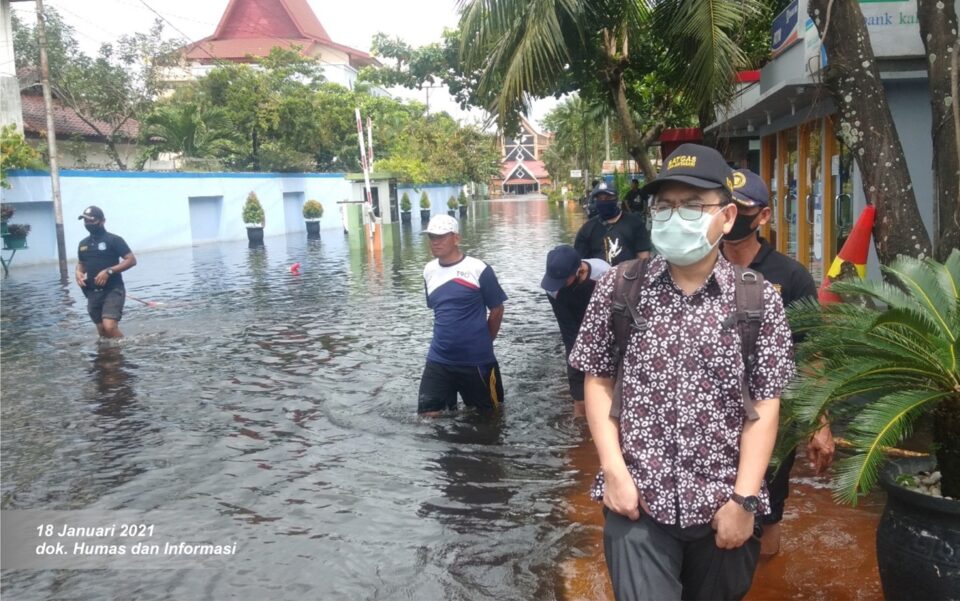 Rector: “If you are grateful for a little help, it will be a blessing.”

The COVID-19 outbreak that has hit the world has had an economic and social impact on society. The flood disaster that hit the South Kalimantan region since January 14, 2021, has exacerbated this condition, especially for those affected, including the UIN Antasari fellows.

In response to this, UIN Antasari took participation to help. The following is an excerpt of an interview with the Chancellor of UIN Antasari, Prof. Dr. H. Mujiburrahman, MA, in his office.

What have you done in response to the flood crisis during these two weeks?

In an emergency, what comes first is what must be done immediately. For example, on Thursday, January 14, 2021, we immediately ordered vice rectors to announce that UIN residents affected by the flood worked from home even until Wednesday, January 20, 2021. It turned out that the flood was getting worse so that WFH was until January 22, 2021. Alhamdulillah, on January 25, 2021, most of the officials and employees were able to work from office. We made all those decisions online.

Apart from working from home, what else was urgent at the time?

What urgent was evacuating UIN residents whose houses are badly flooded. We evacuated a number of students, security guards, cleaning service employees and lecturers. Our students take them to campus dormitories, while security guards, cleaning services, education staff and lecturers at the campus guest house. However, some of them prefer to stay with their families’ homes. For coordination, we assigned the COVID-19 Task Force as a Flood Task Force at once. We also provided logistical assistance for those who were evacuated to the campus. There was also logistical assistance that comes from outside campus.

What about the flooded campus buildings?

On Friday, January 15, 2021, I had anticipated by asking unit leaders to lift salvageable items in low-floor buildings. For example, at the Faculty of Tarbiyah and Teacher Training, I asked for the items in the library and practice field experience room to be secured. In the Faculty of Da’wah and Communication Studies, there was a library room that is in danger of being submerged, so I asked for the books to be secured. The first floor of the central library and rectorate building were in similar condition. To ensure all of this, I went to campus almost every day, even though some leaders could not because they were affected by the flood.

Was there any help for the community outside UIN?

Yes, there was. The quickest and the earliest were the student activists who are members of the Student Executive Council, the MAPALA student association, who happen to have an inflatable boat and the volunteer corps who are close to Indonesian Red Cross. They volunteered and raised funds on their own initiative. There were also initiatives from Study Programs at the Faculty, Dharma Wanita UIN, some our lecturers and staff personally who raised funds and worked and help for the community.

Yes, we did. On Friday night, January 15, 2021, I have asked the Chairperson of zakat management unit UIN Antasari to open donations for those affected by the flood. Considering that there were so many institutions and people who opened donations to be distributed to the community in the form of logistics, we decided that the funds obtained were specifically to help UIN students who were hit by the flood in paying their single tuition. The amount would be determined according to the funds obtained. On January 20, 2021, we announced to all students who were flood victims to apply for single tuition assistance, with a deadline of January 28, 2021. We also extended the re-registration and payment of single tuition until February 7, 2021. We hoped that those flood affected can continue to study.

How much money had been raised?

We thanked for the institutions and donors who sent the money to the zakat management unit UIN Antasari account. There were five PTKINs that sent their donations, namely UIN Walisongo Semarang, UIN Syarif Hidayatullah Jakarta, UIN Sunan Ampel Surabaya, UIN Sultan Thaha Saifuddin Jambi and IAIN Samarinda. There was also assistance from PT Telkom. Not forget to mention UIN officials, lecturers and education staff also contributed a lot. My friends, in various parts of the archipelago, also personally sent the money. In addition, each faculty also opens donations to lecturers and education staff. The total obtained is not much, not too little, which is around Rp. 200 million.

How were funds distributed?

After the registration period for single tuition assistance for flood victims and single tuition reduction for those affected by COVID-19 closed on January 28, 2021, the faculty verified eligibility. For example whether the persons were really affected? Whether they are currently receiving a scholarship? Apart from being affected by the flood, did they also register for the reduction of the COVID-19 and single tuition? We only met on February 1,2021, and after being verified, it was announced on February 2, 2021.

The total number of people who asked for assistance affected by the flood and passed the verification was 748 people. These were all from undergraduate students. By calculating the available funds, we were only able to help Rp 250,000 per person. It was not much. However, our singe tuition is also low. There are Rp 400, 000, Rp 600, 000, Rp 800,000, Rp 1,200,000.  Looking at the amount of single tuition, Rp 250,000 was quite helpful. I hope, all of were grateful, because with gratitude, sustenance will be blessed and increase. On the other hand, regrettably, we have not been able to give help Graduate students who applied. What we could help was simply extended the registration period for them.

How about reducing single tuition for those affected by COVID-19?

Now, what to do after the flood?

The floors have been cleaned. We took inventory of items damaged by the flood. There were a number of broken tables and cupboards. There were chipped floor tiles. There were carpets that need to be laundry. There was an AC compressor that needs cleaning. All of these stuffs have already implemented.

Lastly, is there a message you want to convey?

I thank you for all help, whether it was money, energy or thoughts. In particular, I would like to thank to the Rector of UIN Walisongo Semarang, UIN Syarif Hidayatullah Jakarta, UIN Sunan Ampel Surabaya, UIN Sultan Thaha Saifuddin Jambi and IAIN Samarinda. For my friends from the UIN Antasari campus, so many people whom we have to help, including family, neighbors and other close people, because of flood and COVID-19. I really appreciate all the small and large help given, thank you! Apologize if our service still has many shortcomings. 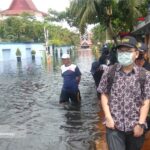