UIN Antasari Banjarmasin as the organizer of the event has encouraged the development of Islam, not only locally but also globally. “Islam is a universal religion so Muslims in Indonesia can be different (in the cultural point of view) from Muslims in Thailand or Taiwan. Moreover, we are now entering the Industrial Revolution 4.0 that has been marked by the presence of advanced technology such as smart phones that connect us with other Muslims in the world. Through this advance revoulition, we can appreciate the values ​​of cosmopolitanism, “as Mujib explained.

Dr. Sahiron also mentioned that this conference was very important considering that it could be a place to discuss the global world and the Qur’an contextually. “The universality of Islam and also the Qur’an needs to be interpreted from time to time contextually. By this, we can apply the concepts of the Qur’an and Islam in general, in other words, Islamic Cosmopolitanism, “he said.

The conference continued with parallel discussions attended by presenters who came from lecturers and researchers in Indonesia. 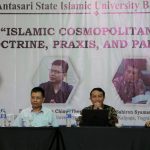 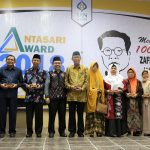