In Higher Education, there are two types of leadership. The first is administrative leaders such as chancellor, deans, study program heads and so on, and the second is academic leaders such as lecturers and even professors. On prestigious overseas campuses, people are even closer and familiar with their professors than with their deans, directors or chancellor. Famous professor, that’s how it should be. Even the professors who also signed the diploma “said Mujiburrahman while giving his speech at the inauguration ceremony of Prof. Dr. H. Ridhahani Fidzi, M.Pd at Mastur Jahri Auditorium (01/16/18).

The Professor of Religion Sociology also revealed what George Makdisi stated in his book “The Rise of Colleges: Institutions of Learning in Islam and the West” that illustrated what medieval Islamic universities did, especially madrasah / the University of Nizomiyah and Al Azhar did, were actually done too by westerners with their professors now. Makdisi according to Mujib said that the University of Nizomiyah had never issued a diploma. The issuing certificate is directly given by the teacher to the student. According to him, this shows how important the role of a teacher / professor for his students.

Then, the Utrecht University Alumni also quoted fragments of speeches entitled Universities and Their Function which was delivered by Alfred North Whitehead (1927), a well-known philosopher from Harvard University that “The justification for a university is that it preserves the connection between knowledge and the zest of life, by uniting the young and the old in the imaginative consideration of learning.”

“In Higher Education, we are not adequate if we just provide knowledge, but it must be more than that, that is to develop knowledge itself. Young generation has high imagination, but little experience, while parents have a lot of experience, but their imagination has begun to decrease. According to Alfred, the combination between both of them will produce new knowledge and new sciences,” Mujib explained.

Furthermore, the Chancellor of UIN Antasari also said that in Higher Education in the Era of the Fourth Industrial Revolution, a book published by the National University of Singapore in 2018 stated that future challenges for our young generation were not sufficiently faced with specialist skills. People must be willing to learn interdisciplinary and open themselves to various disciplines. The required jobs in the future are more demanding to cognitive skills which are then revealed to be cognitive flexibility, which is cognitively having the ability to be flexible, adapting to new situation, and trying new things.

“Never imagined before that what Go-Jek and Ruang Guru did today was so awesome. Even international investors are competing to invest. This is a change that we’ve never imagined before. This is our challenge in higher education today, how we, as the professors or lecturers, encourage the imagination and creativity of our students so that they have sufficient cognitive skills to face the challenges and changes of time in the future, “Mujib said

Ending his remarks, Mujiburrahman cited Hassan Hanafi’s words in his essay “Qadhaya Muatsirat Fi Fikrina al Mua’hir”, which is “A lecturer or teacher is a thinker, and a thinker has a big responsibility to his community. Thought is not just an expressed word, but a witness to the age. A witness to the age here means the truth words that distinguish it from falsehood. It is an assessment of reality and a disclosure of its nature. Thinkers are witnesses and a witness is a martyr.” (rdh-public relation) 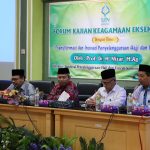 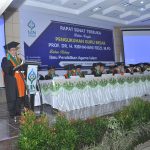