UIN Antasari, Banjarmasin – Prof. Dr. Hj. Masyitah Umar, M. Hum., has been inaugurated as a Professor in the field of Fiqh at the Sharia Faculty of UIN Antasari, located at the Mastur Jahri Auditorium. Monday (08/03/2021)

The inauguration ceremony which was also broadcast online via zoom meeting and UIN Antasari’s youtube channel was attended by the rector, the Senate, vice-rectors, deans and leadership ranks at UIN Antasari and their families while still adhering to health protocols for pandemic. The series of events took place solemnly starting with listening to the national anthem of Indonesia Raya and the Hymn of UIN Antasari, reciting the holy verses of the Koran, saying a prayer, reading a decree by the Dean of the Faculty of Sharia, Dr. H. Jalaluddin, M. Hum, showing the profile video of Prof. Hj. Masyithah Umar, M. Hum, the inauguration of Professors which was marked by drapping a scarf by the Rector of UIN Antasari Prof. Dr. H. Mujiburrahman and the submission of the Decree by the Chair of the Senate Prof. Dr. HA Hafiz Anshary AZ, MA.

After the series of inaugural events were completed, Prof. Dr. Hj. Masyithah Umar, M.Hum delivered her scientific oration entitled “Women Before the Court”. In her speech, Masyitah said that the Gender Equality Index and the Gender Development Index show that there are still many gender inequalities / inequalities before the courts. Women are still weak in expressing themselves, which needs to be supported by empowerment.

She mentioned that various divorce cases that occurred before the courts made women “not move” with various contributing factors such as domestic violence, the Advisory Board for the Guidance and Preservation of Marriage which did not get trust, the community’s lack of understanding about the divorce proceedings in the Religious Courts and framed by the use of legal counsel for the situation, secret marriage and underage marriage.

According to Masyitah, the above causal factors in the judiciary cannot be used as an excuse in the decision as a reason for divorce and are changed to “continuous bickering” so that women cannot express themselves and make mistakes that cause divorce, who started it, how the ishlah is also not visible. 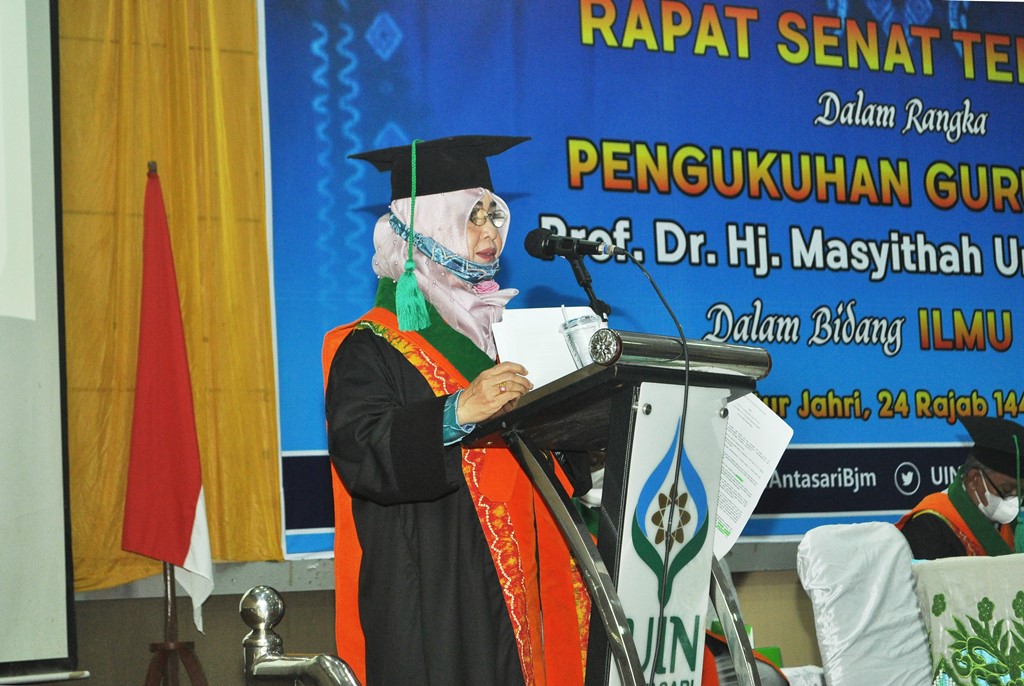 She recommended that women who have the power to express themselves need to be empowered economically, knowledgeably, emotionally, socially, politically and legally. To give a sense of justice to women, it is necessary to increase the number of iwadh written in the marriage book, excellent service is needed by the panel of judges considering that divorce cases are very high, increasing enlightenment through socialization and legal counseling, Agency for Counseling, Fostering and Perpetuation of Marriage needs to be functioned and needs continuous empowerment, it is necessary to increase publications on Family Law cases that are decided through official announcements and electronic print media, or other print media.

At the end of her speech, Masyitah thanked the rector, vice rectors, the chair of the Senate and members of the senate, officials at UIN Antasari and the entire academic community of UIN Antasari. She also thanked her friends who have always been loyal since college, worked as civil servants and hoped that other friends would soon follow to become Professors.

On the same occasion, the Rector of UIN Antasari, Mujiburrahman on behalf of the leadership and the entire academic community, congratulated Prof. Dr. Hj. Masyitah Umar, M. Hum.

“I congratulate Masyithah Umar on the success of in achieving the highest academic position as a Professor of Fiqh, we all know, it is not easy to reach that position. It takes a long struggle and dedication as an academic.” He hopes that, in addition to their main task of providing knowledge and teaching, professors can be active in every social activity, besides that in the current millennial era professors must also share knowledge and lectures on social media and electronic media.

He feels that the increasing number of professors at UIN Antasari Banjarmasin is not only a personal pride, but also an institutional pride. “Hopefully UIN Antasari will continue to produce more professors, who inspire a lot, lead to scientific things in their research, which are useful for Indonesia,” he concluded. 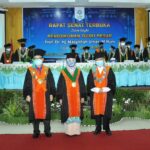