The Inspector of Inauguration Ceremony was Muhammad Irwan Anshari, S. E., M.M.  The Rector of UIN Antasari Banjarmasin, Prof. Dr. H. Mujiburrahman, M.A., was inaugurated as the Leader of the Rover Council of Pangeran Antasari – Dewi Saranti Clan alongside with Dr. Hamdan and Dr. Sukarni as Deputy Leader. Meanwhile the Daily Leader was held by Dr. Nida Mufidah.

“Scouting activity is a form of Special Activity Unit (UKK) at UIN Antasari Banjarmasin. It is kind of very special activity because it deals with the outside world of campus. Since when I was a student, Scouting has been around and existed until now. For me it is a pride to be Scout Leader, “the Rector explained in his speech. Prof. Mujib also advised all members of the Scout in the Base of UIN Antasari to maintain integrity because it will become the main scout fostering.

“After transforming into State Islamic University (UIN), we are strengthening ourselves into a center of scientific integration that is locally based and globally minded. In addition, there are some changes that also adapt the model of Scout coaching, one of which that we are implementing it in New Students Orientation. I hope in the future, positive things in Scouting can be related with other activities, “he continued.

Meanwhile, Irwan Anshari as the Inspector of the Ceremony hopes that Scout Group of UIN Antasari Banjarmasin becoming the pride of its campus as well as the people of Banjarmasin. “The scout of UIN Antasari is expected to be a unique scout group of Banjarese that is eloquent with sincerety in doing the Quran values. Hopefully this program of stewardship activities are going to be more creative and get significant breakthrough of it,” as Irwan said.

Scouting becomes one of UIN Antasari students’ certain place to build their personalities and noble characters, high mental, morality, good characters as well as strong faith in God in accordance with the purpose of Scout Movement. Victory for Scout Group of UIN Antasari! 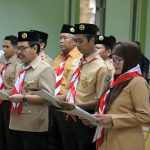 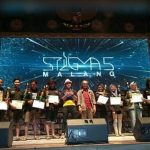